Look at the Spooky Pancakes from TidyMom! 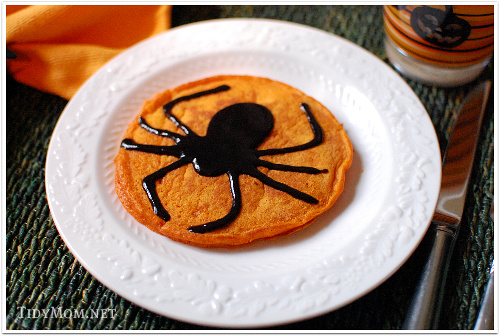 Cheryl had been “dying” to make these pancakes for almost a year when she first saw the idea at notmartha.org (another awesome blog).
Just think of the fun the whole family will have making their own spooky pancakes! 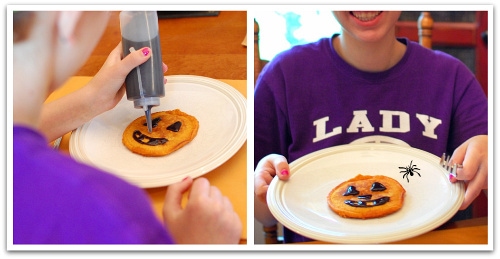 Cheryl used her own  Pumpkin Pancake recipe and added a little orange food coloring to make them extra “festive”.

(recipe from the clever Not Martha)

In a small saucepan combine sugars, flour and cinnamon. Add vanilla and water. Over medium heat bring mixture to a boil, stirring continuously. As it heats squirt in a little of the black food coloring and mix in, add more until it’s as dark as can be (it doesn’t take much). Allow to boil for a few moments until the mixture has noticeably thickened. Remove from heat and allow to cool enough to put into a plastic squeeze bottle. Syrup can be made ahead and refrigerated.  Warm syrup before serving by placing the squeeze bottle in a bowl of warm water (not boiling). Let each person decorate their own pancake!
There’s nothing SCARY about making these pancakes!
Thanks Cheryl for such good ideas, pictures and recipes!