Today we  have a fabulous guest post from Angry Julie. I was lucky enough to meet Julie at Bloggy Bootcamp. Making friends with other bloggers is one of the biggest benefits of going to blog conferences!

Julie is here showing us how to make beautiful rainbow cupcakes.  Make sure you stop by and check out her blog! 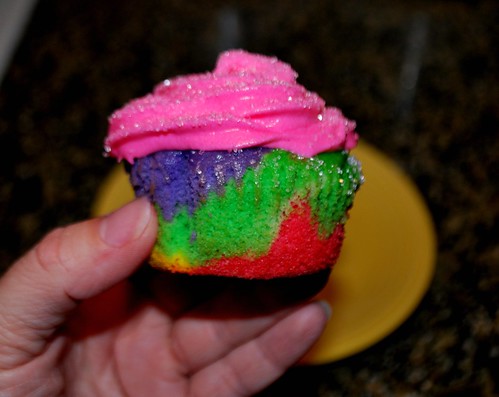 I think I shocked my family and friends last night when I posted pictures of the cupcakes last night on my Facebook account.  There was quite some shock and awe going.  I can pretty much follow a recipe, if I like it. As a toddler would say, “I just don’t want to.” But really, my friend Ruth summed it up best, “The cupcake looks so good. Kudos to you Jules…who knew?? All of these years you have been playing the “I can’t cook or bake” card.  What you really should have been saying was, “I DON’T WANT to cook or bake.”

I’ve seen many people bake these rainbow cupcakes online.  I thought, “why not” and wanted to give it a try.  I rarely bake, maybe once a month. So I had to do some supply shopping before I even started.  I headed straight towards my local Sur La Table, which is way too convenient.  I also asked my friend, Kristin for some help.  Kristin has been a big help in this project.  She basically provided me with supplies, recipes, and advice.  Without Kristin, I would have nothing.  I would have had plain ole’ cake mix with frosting from a jar. 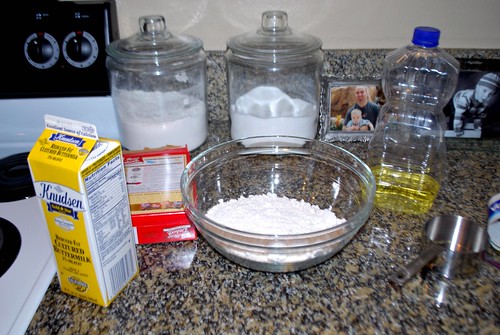 Using substitutions above, follow the box instructions to mix all ingredients in a large bowl. Beat with an electric mixer at low to medium speed until moistened, about 30 seconds. Increase speed to high and beat until thick, 2 minutes longer.

Spoon half of the batter into a zip-top bag. Snip a ¼-inch corner from the bag and fill the paper liners 2/3 full. Bake 15 to 20 minutes until tops are golden and a toothpick inserted in the center comes out clean. Remove cupcakes from baking pans, place on a wire rack . Cool completely.

I used Duncan Hines White Cake Mix for my cupcakes.  Kristin said that I need to use white cake mix as the color stands out better. I also adapted parts of this recipe to make rainbow cupcakes. 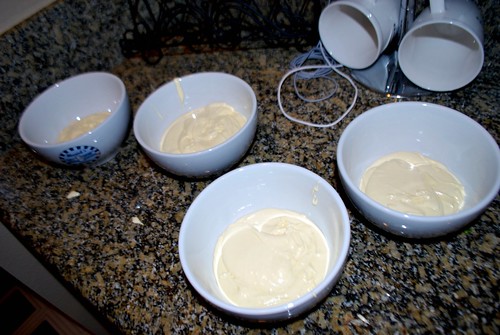 After mixing the batter, I separated it into four different bowls.  I used four bowls, because I was going to use four different colors for my “rainbow effect”. 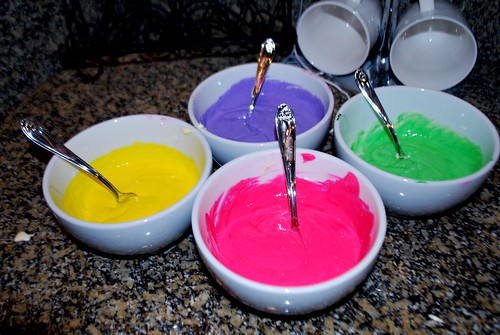 I used Wilton’s Icing Colors to get the desired effect. The colors that I used were Leaf Green, Violet, Pink, and Lemon Yellow. I was going for a more muted effect, but obviously they are quite bright. You just need to use a teeny tiny bit of the icing color for the batter. It was my first time so I got carried away.  Like I said, it was my first time. I had no clue on what I was doing. 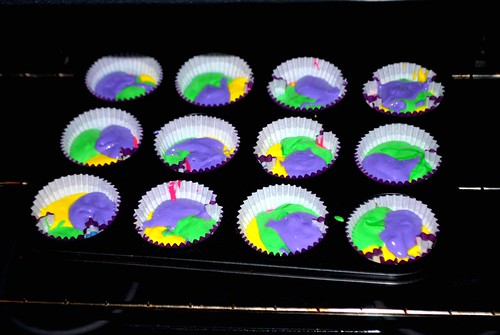 I didn’t take a picture of the filing the cupcakes phase. It was a complete mess and I had colored batter everywhere. My kitchen is small and there are only so many places to put stuff.  I pretty much layered the batter and it sloshed around.  I started by putting it into bags and trying to drip it into the baking cups. Yea, that was an epic fail.  I gave up and used a spoon. My theory is, “as long as it looks somewhat rainbow layered, it’s good enough.” Kristin told me that when you do rainbow cupcakes, you need to use a little less batter in your cups. She said that the layered colored batter rises differently.  I didn’t know how far to fill them up.  I filled them up someway between 1/2 and 3/4 full. 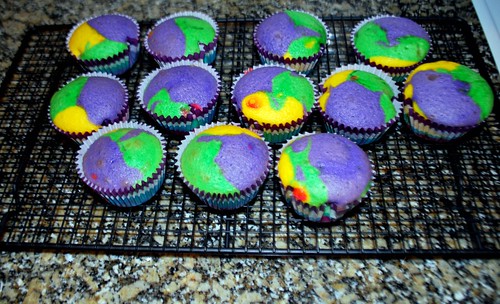 These are how the cupcakes looked after popping them out of the muffin tin. They are on the cooling rack.  They were not as big on top as I would have liked.  I was a bit apprehensive when filing the baking cups.  Next time, I will fill them up a little more.

I let the cupcakes cool for about 30-45 minutes before I started working on the icing/frosting.  I’m using a recipe that Kristin gave me for icing. 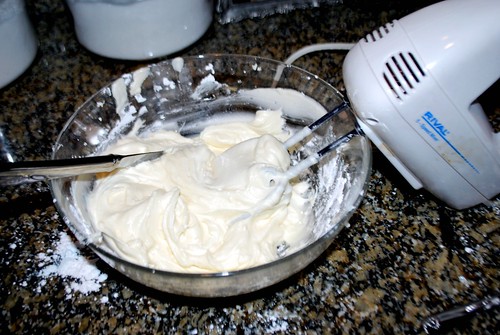 Depending on how many cupcakes you are making, you might want to double or reduce by half.

Beat cream cheese and butter on med until fluffy, about 3 mins. Add powdered sugar, then liquids. Beat on med-high/high for about 3 more minutes. Taste. If it still tastes sugary, beat for another minute.

This makes about… 1.5 qts so I can usually frost about 2-3 dozen cupcakes depending on how much I pipe.

I split this recipe in half because I was just doing a test batch.  I would have brought out my bigger mixer if I was making the whole recipe. It got quite fluffy when I added in the powdered sugar. I also used whipping cream for my recipe.  I added the Wilton pink icing color once again, to color my icing/frosting.  I could have done several colors, but I was only making a dozen.  I added the icing color into the bowl and used the hand mixer on low for about a minute to make sure it was thoroughly mixed.

I did not get a picture of myself icing the cupcakes because well it’s pretty hard to ice cupcakes and take photographs at the same time. Plus, Angry Husband went to the store while I was doing this.

I purchased a Wilton 12-Piece Cupcake Decorating Set to pipe on the icing.  I used the 1M Star Tip on my cupcakes. Seriously, it was so easy. I just tossed some icing into the bag with the tip and swirled it around on the cupcake.  I swear, I have never ever done this before. 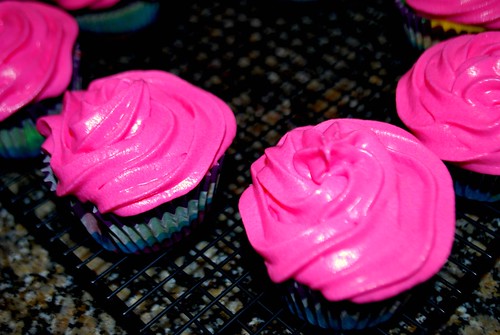 Not bad for a first timer, right? I’m pretty impressed with myself.  I even let Angry Kid help me out.  He thought that it was the coolest thing ever.  He kept wanting to eat the cupcakes also. I told him that he had to wait.  Angry Husband came home from the store after I had finished icing them. He was rather impressed.

But you know I’m not finished, right? I had to add some sugar to the tops of my cupcakes.  I used a pink sugar the Kristin bought for me, at a baking supply store. 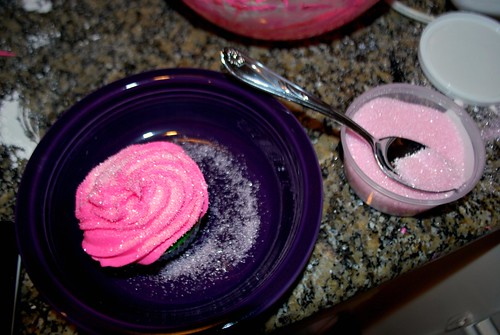 Here’s a close-up of a cupcake after being sugar-dusted. 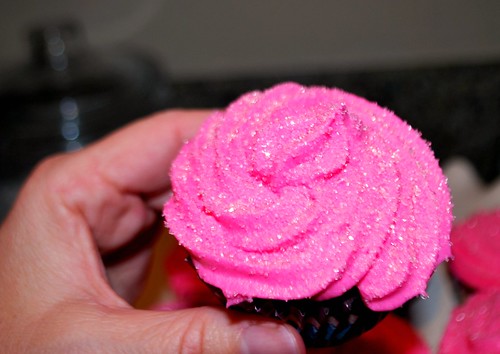 By the time I finished everything, it was almost 11pm. I’m such a night owl.  But Angry Husband wanted to see the center, so I cut one open.  I let Angry Kid eat the actual cake, and no frosting. I have no clue why he was up that late. Probably because he wanted to see the middle of the cupcakes also. Like I’ve always said, “I’m mother of the year!” 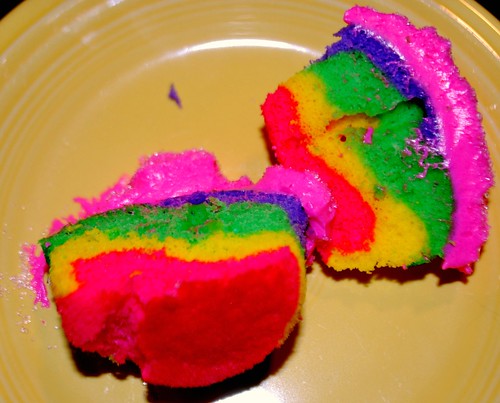 I tasted one this morning. It was yummy.  This was my practice run for Easter.  I’m going to try to make the colors a little lighter for this weekend.

Thanks Julie! I am going to give this a try.

SOON you will be able to get all your baking and candy making supplies online from my new shop Sweet!. Will you give us a follow on twitter and a like on facebook to help us get started?